Many of you know that it's been quite a while since I was commercially available..
ARTzink is a mere nom de plume, which as an artist I have been attaching to the many incarnations of me for a very long time.
I like the ring of it, it has the ink in it, the zink for a painting gesso and above all - ART.
I may even opt to have it written on the urn with my ashes, before those precious remains are dumped in the Artctic Ocean.
This blog does not sell anything, it just records my enthusiastic creative pursuits so it can be shared among my friends, fans and family.
Thank you and Love you.

Ever since the purchase of the delightful romantic utmost picturesque view I was inquiring about its provenience. I did not have success with the brief North American thread;

Once I assumed search by trying to identify the landscape it actually represents I was a lot more lucky.
Derwentwater towards the Jaws of Burrowdale is most likely the landscape my painting represents.
Here is a view of the mountains from a bit different angle.

This beautiful scenery inspired many artists.
The genre begun with detailed, highly atmospheric landscapes by Flemish artists.
It was then continued by Italian and French painters, such as Claude Lorraine, Poussaint and others.
The Romantics, however, dispensed with the layer of mythological or social figurative or architectural elements.
It bloomed in Scotland at the turn of the 18/19 century with the Edinburgh College of Art furthering the style. The need for the artists to travel and transport the work led to increased popularity of aquarelle paint. I guess I will look again into my portfolio of watercolor images of mountainscapes by Sir William Edmond Logan. I have a burning suspicion that one of his works depicts the Jaws of Burrowdale too.
I will make another post about it so stay tuned.... 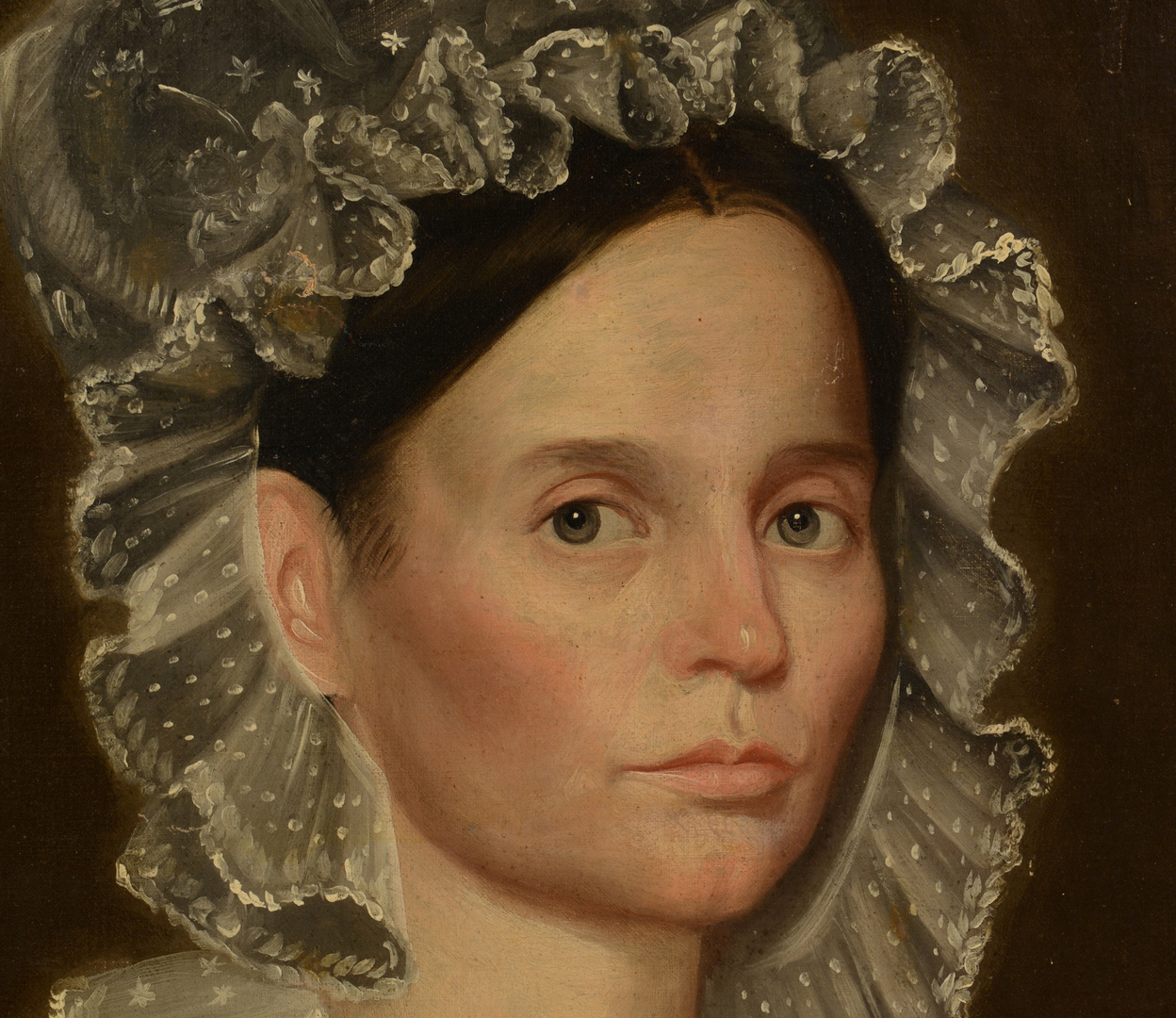 Portrait of a pastor's wife

I have been away from my blog for a while and it is with regret that I found out about six months ago and many of the blogs features can no longer be edited.
It gave me an uneasy feeling of lack of ownership...
Well, of course, I do not own it, Mr. or Mrs Google owns it and I play with the words and pictures on this platform at other entities discretion. 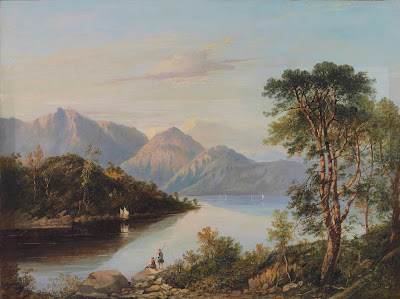 I have for forwarded my research around the beautiful romantic landscape painting I had purchased earlier.
It is not signed so I have been tracing its possible via stylistic analysis.
So here is food for thought.
Definitely it is not a German style painting but Scottish and most likely depicting the region of Cumbria.

Look at those two paintings by Charlotte Nasmith.

She was a daughter of Alexander Nasmith.

Alexander Nasmyth (9 September 1758 – 10 April 1840) was a Scottish landscape painter, a pupil of Allan Ramsay. (...)
Nasmyth's six daughters all became notable artists. His daughters were Jane, Barbara, Margaret, Elizabeth, Anne and Charlotte.[11] His eldest son, Patrick Nasmyth, studied under his father, then went to London and attracted attention as a landscapist.[1]  (Wikipedia) 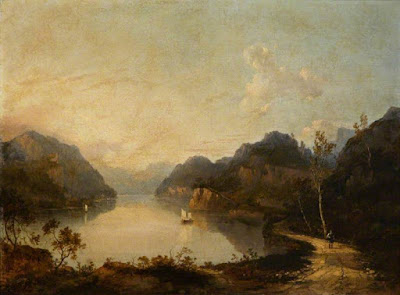 Having at the moment on access to any European collections I had to relay on an online research.
Dropping of the German thread, I decided to try to identify the landscape on my painting, the particularly shaped mountain with two peaks and a cascading side and place it in a 18/early 19th century context.
Et voila, I immediately recognized the the hill, the lake  painted just slightly at a different angle, the sail boats, that shimmering golden air of Romanticism and of the mastic varnish.
The warmth of this discovery was quite remarkable.

Yes, my initial attempt at cleaning the surface was a serious mistake.
However, the waxy for i extracted pointed to the varnish being mastic.
It is also the clue that the landscape was painted before ca 1830 since more prevalent later Damar varnish was not in use earlier. I have also found that while Damar varnish used to contributing to more distinctive yellowing of the paint surface, Mastic did rather darken it.

So armed with this assumption I have successfully neutralized most of the wax and coated the rest of the canvas with Mastic. Mastic does not harden as much as Damar, it gave a gorgeous sheen.
This beautifully smelling mixture of natural resin (the Tears of Chios) and turpentine has brought the painting to a spectacular light.

I will surely one day travel to Scotland and devote more research to the subject.
As a younger person I did not quite understand the development of the Romantic style.
But now I am beginning to understand, particularly after reading Goncourt's French Eighteenth Century Painters) (1859–1875) comments on the artistry of Watteau.
The "back to the Nature" was the first underlying prompt, away from the stifle air of the cities, away from stiff and formal clothing. The air of Liberty was surely filling the sails.

The love of print still going strong...
The most recent acquisition is this impressive in its size steel engraving by Lumb Stocks, RA.

it follows the wall mural at the Westminster by Daniel Maclise, RA representing - what else the Brits kicking French ass (sorry....) at Waterloo. Or rather, the battle's aftermath.
It is heavily imbued with the winners vs losers iconography: Wellington in the highlight and Bluthe in the shadows, the British solders in Roman helmets with plumage, the horse making its way in the knee-high carnage. Ohhhh, the Brits with solemn yet "just" faces, the French in their shacos are sad and lost.
The prints edition from 1876.
Original frame in serious need of repair, but recoverable.
I have replaced all brutally simple acidic backing with the ph balanced board and will insert clear acrylic instead of old seriously green glass.


The description from Doe & Hope Auction site
These line engravings were published by The Art Union in 1876 after the 1868 original wall painting by Daniel Maclise in the Royal Gallery at the Palace of Westminster. Wellington and Blucher mounted on horses, with cavalry behind them, shake hands in front of ruined building surrounded by numerous mounted and dismounted soldiers and bandsman; dead and wounded lying in the foreground. The French army is seen in pursuit along the road behind. A somewhat fanciful rendering of one of the great melodramatic moments in history.

Late in the evening on the day of the battle of Waterloo (Sunday, June 18th. 1815) Wellington and Blücher met on horseback outside the somewhat battered but aptly named La Belle Alliance inn where they briefly shook hands and congratulated each other on their victory. "Quelle affaire!" the elderly Prussian Marshal exclaimed, - Wellington said afterwards that was all the French he knew. Blücher also suggested La Belle Alliance would be a good name for the battle, but the Duke made no reply.
Following the meeting of the victorious leaders, during the rest of the night the Prussians pursued the remnants of the routed French army, from the inn, down the road toward France by which they had come.

Daniel Maclise, R.A. (1806 -1870) was an Irish historical painter whose fame rests chiefly on a series of lithograph portraits of contemporary celebrities and on two vast frescoes that he painted in the Royal Gallery in the House of Lords, of which this is a copy of one.

I live in the past.
I take everything that has happened to me and arrange it. From a distance like that, it doesn't do any harm, you'd almost let yourself be caught
in it.
(J-P Sartre)